What is the Designing for Dementia Knowledge Library?

The Designing for Dementia Knowledge Library is an information database that provides stories told by people with dementia. These stories detail what they have experienced since the onset of dementia, their joys or hopes, the difficulties or challenges they face in daily living, the mental and physical dysfunctions behind those difficulties, and their wisdom for coping with their challenges.
People with dementia who have participated in Designing for Dementia Hub interviews, their families and supporters, and academics and designers have devoted a great deal of time to analyzing and editing the content of the Designing for Dementia Knowledge Library.

What are Designing for Dementia Hub interviews?

Our current plan is to meet with 100 people with dementia across Japan and listen to their stories on a continuing basis. As of January 2020, we have met with more than 90 people.

* Our interviews are conducted based on the approval of the Ethics Committee of the Graduate School of Health Management at Keio University: “Steps toward the co-creation of a future in which we live well with dementia: Difficulty, ingenuity, purpose, and joy in the lives of people with dementia” (Approval number: 2019-20).

We interview people with dementia (in principle, people diagnosed with dementia) who have agreed to participate in our research project. Interviews are about 60 to 90 minutes long. During the interviews, we ask questions regarding the items listed below but remain flexible so that interviewees can tell stories that reflect their interests, concerns, and challenges.
- Past events in their lives and how their dementia progressed
- What they enjoy, what they live for, and what they want to achieve
- Difficulties, challenges, ingenuity, and knowledge in their lives
- Other

Based on the stories we are told by people with dementia, we sort and analyze their experiences after developing dementia, what they enjoy, difficulties and challenges across areas of daily living that hinder their enjoyment, their ingenuity and knowledge, and the mental and physical dysfunctions behind their difficulties and challenges.
In this process, upon receiving consent of the person with dementia we interviewed, we also ask their families and supporters for their perspectives. Edits are then made to reflect perspectives that complement what we were told by the person with dementia.

Again, upon receiving consent of the person with dementia we interviewed, and after their review, we publish what was told in interviews and the results of subsequent analyses in the Designing for Dementia Knowledge Library.

Structure of the Designing for Dementia Knowledge Library

We post individual profiles of people with dementia that include brief descriptions of their personal histories, what they enjoy, and what they want to do. We also sort difficulties in their lives that frequently hinder their ability to enjoy living or do what they want to do into “Challenges of daily living.” We then connect these challenges with the mental and physical dysfunctions among the various factors behind those challenges. Challenges and dysfunctions are then listed with matching knowledge on methods of coping with those challenges.

When, where, and in which situations do people with dementia feel that daily living is difficult? After collecting their stories through interviews, we created the map below by sorting what we heard into 11 categories and 180 challenges or keywords. These 11 categories are meant to provide full, 360-degree coverage of aspects of daily living for people with dementia. They are: getting dressed, eating, home living, budgeting, shopping, care, movement, socializing, leisure, study, and work.. So far, we have identified 180 challenges that fall under these categories, but their number might increase as we conduct more interviews and make new findings. For example, let’s think about “getting dressed,” which is part of our everyday lives. Choosing comfortable clothes for the day’s weather can be difficult, as can coordinating tops and bottoms. Some people might not be able to recall where their clothes are stored. It might also take someone a long time to put their arm through a sleeve, or their socks might be inside out. These are just a few examples among the various difficulties encountered when getting dressed. Even people who used to enjoy spending time outdoors might feel discouraged when faced with these sorts of challenges.

Mental and physical disabilities associated with diseases such as Alzheimer’s disease, Lewy body dementia, vascular dementia, and frontotemporal dementia are generally categorized into “core symptoms” and “behavioral and psychological symptoms.” 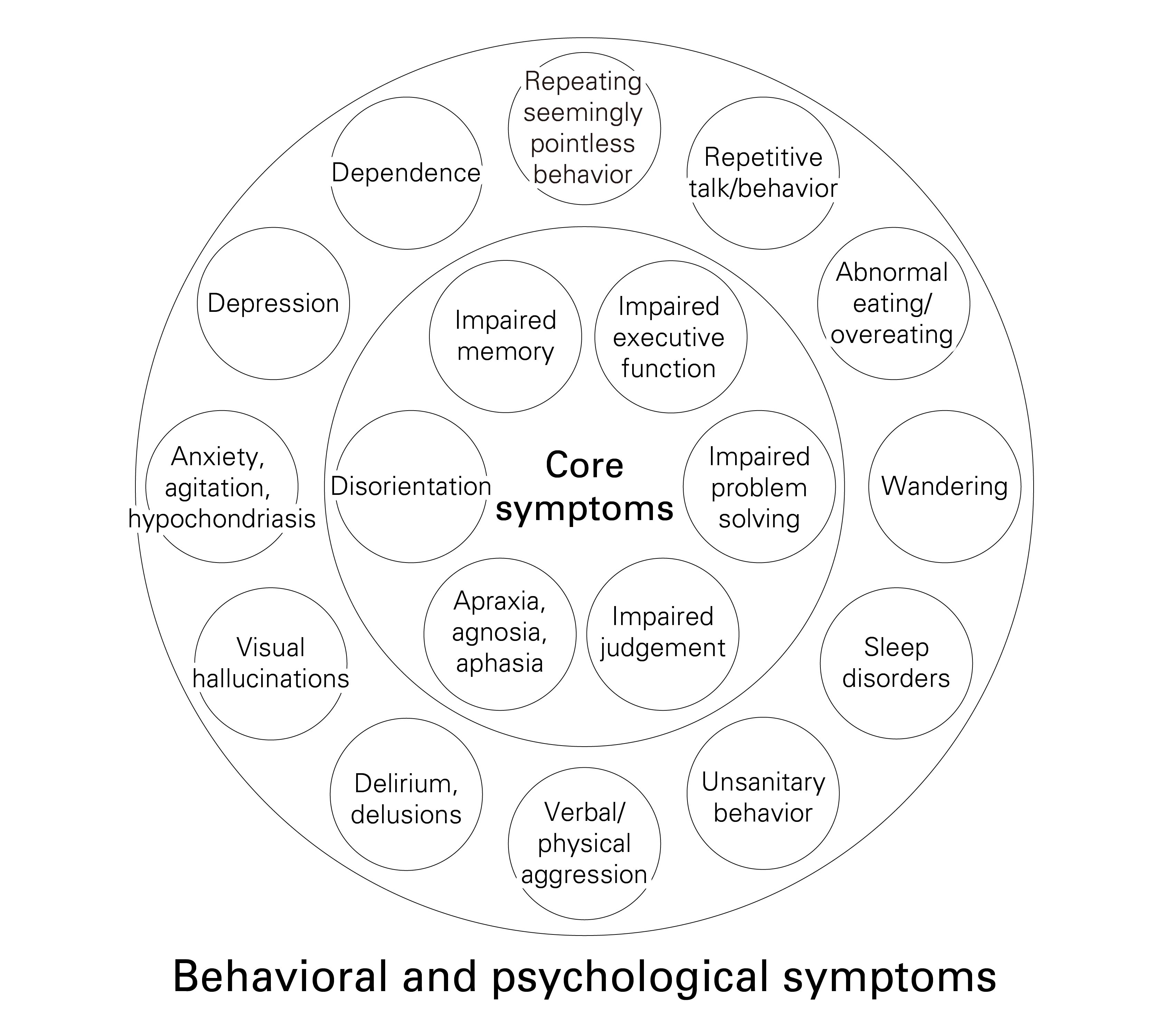 However, this categorization and the terms strongly reflect perspectives of people providing healthcare or long-term care. They do not help us understand what is really happening within the minds and bodies of people with dementia.
Therefore, in our interviews, we asked people with dementia to tell us about issues or problems with their mental and physical abilities in their own words. We then sorted the issues and problems they described into 64 mental and physical dysfunctions while reflecting the perspectives of people with dementia. Again, 64 is merely the number we have today, and it might increase as we talk to more people and learn new things. 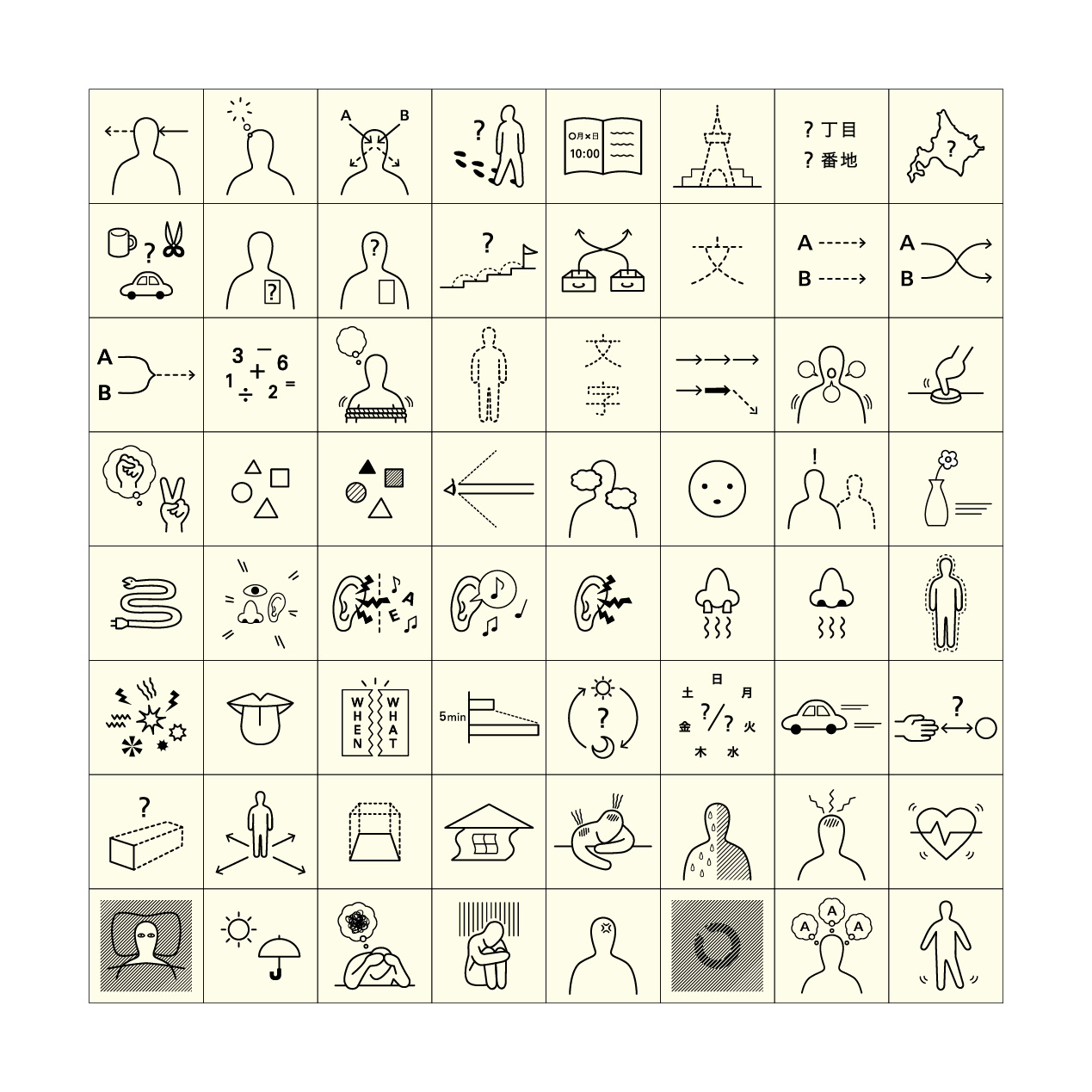 When a person with dementia reaches out for an article of clothing on a hanger, it might be difficult because they cannot judge distance. They might not be able to tell how to put their arm through a sleeve because they find the top, bottom, left, right, inside, or outside of the shirt to be obscure or because they cannot perceive depth. When they finally put an arm in the sleeve, the arm might get stuck halfway and they might get confused as to what direction the arm should go from there. Even when they find the direction the arm should go, they might not be able to move further because they cannot sense the position of or operate the arm well.

As this example shows, putting one’s arm through a sleeve becomes challenging for people with dementia not because they have “simply forgotten how to put on clothes,” but because their abilities are affected by mental and physical dysfunctions, often in combinations. It is important to note that insufficient understanding of facts like this among the people around them adds to the difficulties faced by people with dementia.

The Designing for Dementia Knowledge Library presents part of the outcomes of the research project on “R&D and social implementation of AI for self-reliance/coexistence support by multimodal human-interaction technology, focusing on dementia patients and their families” within the Cabinet Office’s Cross-ministerial Strategic Innovation Promotion Program (SIP).

The above images and text may not be modified, adapted, or distributed without permission.