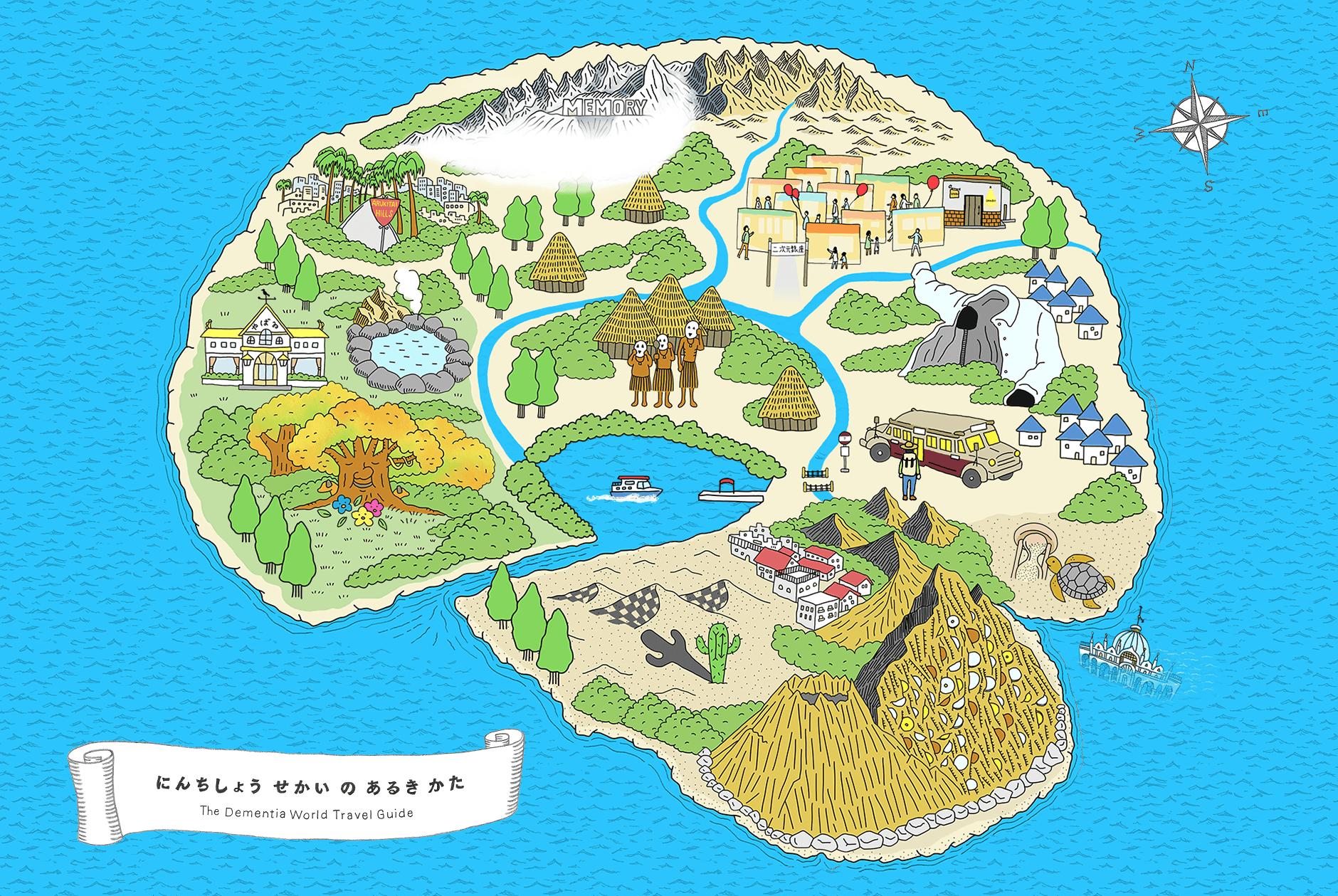 This is the Dementia World. In this world, people and dementia live alongside each other, and everybody experiences a wide variety of unexpected occurrences.

Payment Wall: Here, hurdles must be overcome before people can successfully make payments
Village of the Faceless Tribe: Being in this village makes it impossible to tell one person from another
2D Ginza Shopping District: Where streets never lead to a destination
Timedistortion Palace: Where time passes surprisingly fast
Sleeve Tunnel: This tunnel obscures the direction your arm is going

In fact, whether we have dementia or not, we could all experience these things. Cognitive function declines with age. Sometimes we are tired or we find ourselves in unfamiliar environments.
In this series, we will describe the experiences of people with dementia in anecdotes and travel stories from the Dementia World. Our stories will be easy to understand, familiar to you, and, of course, fun to read.

11 areas and 180 challenges of daily living

When, where, and in which situations do people with dementia feel that daily living is difficult? We gathered their voices through interviews and created the map below by sorting what we heard into 180 keywords or challenges of daily living, which fall under 11 areas.

To provide full, 360-degree coverage of aspects of daily living for people with dementia, we came up with 11 areas: : getting dressed, eating, home living, budgeting, shopping, care, movement, socializing, leisure, study, and work.
So far, we have identified 180 challenges that fall under these areas, but that number might increase as we conduct more interviews and make new findings. We will focus on one or a few of the 180 challenges of daily living in each issue of this series.

Carers often tell us that people with dementia do not like taking baths. There are indeed various reasons behind why they might not want to take baths, which could be misinterpreted as them being resistant to long-term care.

Some people with dementia might say they feel the water is too hot because their senses of temperature are skewed. Some say they get unpleasant, slimy sensations when their bodies touch the bathtub. Others might have difficulties changing clothes due to problems with their visuospatial or physical functions but are reluctant to receive assistance. Yet others could believe that they have just taken a bath because their sense of time or memories are distorted.

Above are examples of how we will be illustrating, in an easy-to-understand manner, mental and physical dysfunctions that lie behind each of the challenges of daily living that we will examine in this series (such as checking out at supermarkets, following signs, and taking baths).

We hope that our stories from the Dementia World will help you better understand what dementia really is.