“Village of the Faceless Tribe” 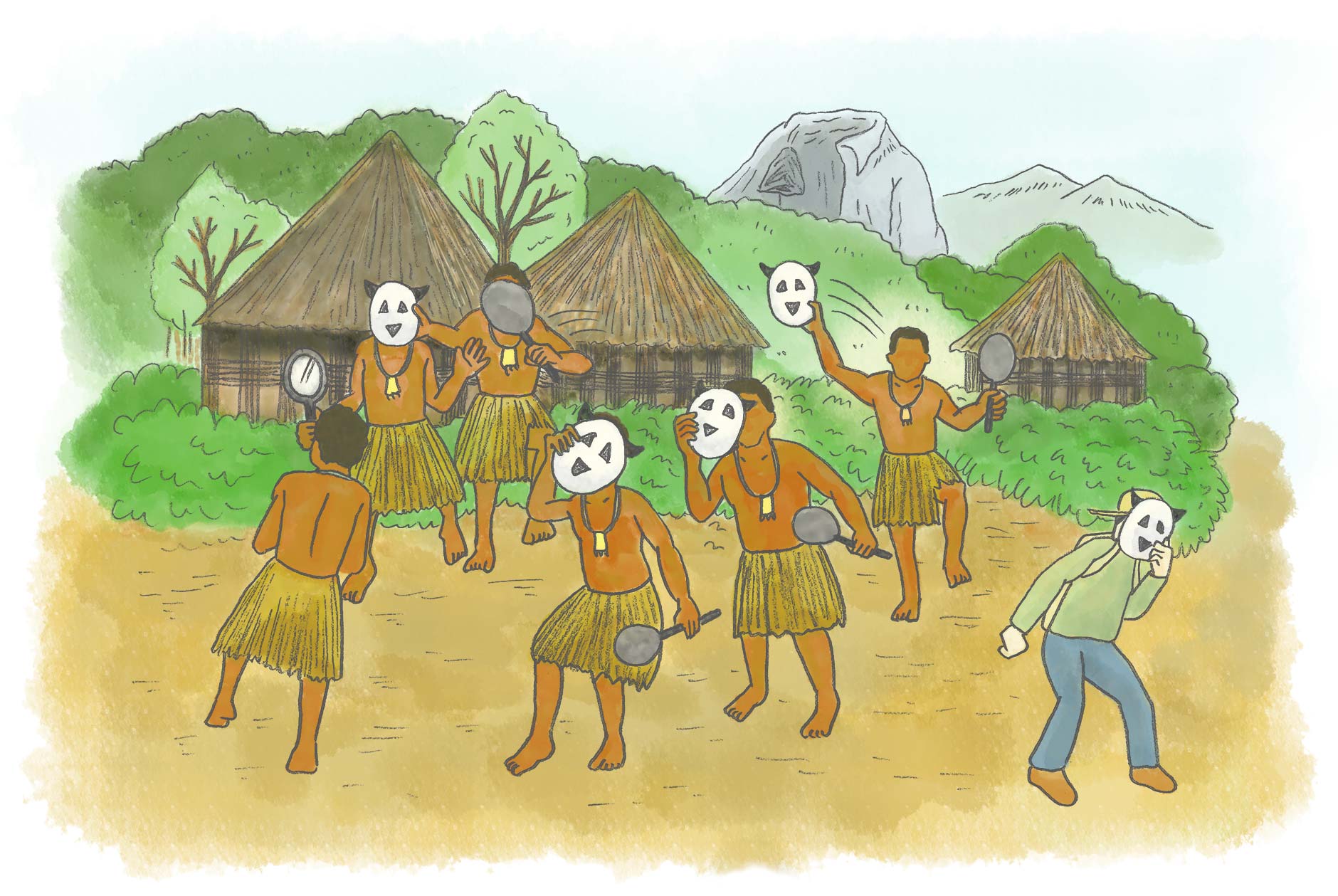 Here in the Dementia World, there is a place called the “Village of the Faceless Tribe.” The villagers there have faces that look very much alike, making it impossible to tell them apart. They even have trouble telling themselves apart from each other. Instead, they tell each other apart and connect with one another through the sounds of their voices, the appearance of their physiques, and, most importantly, by sharing cherished memories.

People often talk about being good or not so good at remembering faces or names. At work, I am sure you have experienced the feeling you have met the person standing in front of you but could not remember his or her name at all.
However, when I was at the office, something even stranger happened to me.
I went down to the reception desk after a receptionist called and told me that my customer had arrived. Then, in the reception area, I found that I couldn’t tell which person was my customer – someone I already knew well.*1

On another occasion, a stranger talked to me from behind on my way to the office. I said hello with a smile, thinking that he was a very friendly man. Later in the day, a colleague told me that he saw me enjoying a conversation with the president. Only then did I realize the man I met was the company president whom I had known for a long time.
Based on our conversation, I could guess that the man probably worked for the same company as I, but his face did not tell me who he was.*1 I was really surprised when I finally found out. At the same time, I was relieved because my colleague thought the president and I were enjoying a conversation. That means I at least did not come across as rude.

When I am looking for someone at work and cannot identify them by their face, I ask colleagues sitting nearby for help. When I do not recognize the face of someone talking to me, I gradually remind myself of the nature of our relationship from the content of the conversation.

In addition to colleagues at work, I have become unable to mentally recall the faces of my family, with whom I have spent years, or the faces of old friends.*1
It is sad, but it does not mean my fond memories of spending time with them have faded away.
Somewhat conversely, I have casually started talking to people passing by in the street, thinking I knew them. However, judging from the looks that they gave me, I obviously did not.*2 (They probably thought I was flirting with them!)

I used to try to remember at least the faces of my customers, friends I see regularly, and my family. I created a list of names with pictures and looked at it all the time. However, I eventually gave up because I realized that the faces in the pictures that I remembered and the faces of the real people in front of me did not match up.*2 I think I perceive two-dimensional faces in pictures and real, three-dimensional faces somewhat differently.
Incidentally, I stopped watching television shows because I could no longer distinguish actors’ faces.*2 However, I found something interesting the other day: I can distinguish animated characters easily.
I think the ability to recognize people’s faces is peculiar.

More recently, I have given up on trying to rely on the memory mechanism in my brain for retaining and recalling people’s faces. Instead, I have decided to ask others for help when I need it. I find everybody around me to be very helpful. I now know that troubles I cannot address on my own can be resolved surprisingly easily.
I have made it a rule to tell people I meet for the first time, “I will probably not recognize you next time I see you, but please talk to me.”

When your mobile phone or smartphone is full of photos, you can use an external storage service or transfer the photos to your computer. Not being able to remember faces was certainly difficult at the beginning. However, once I changed my way of thinking and decided to rely on my colleagues, friends, and family members, I have grown much more comfortable asking others for help.

When people with dementia enter the "“Village of the Faceless Tribe”",
the following 2 mental and physical dysfunctions might be at play.