Enjoy a world that only you can see! 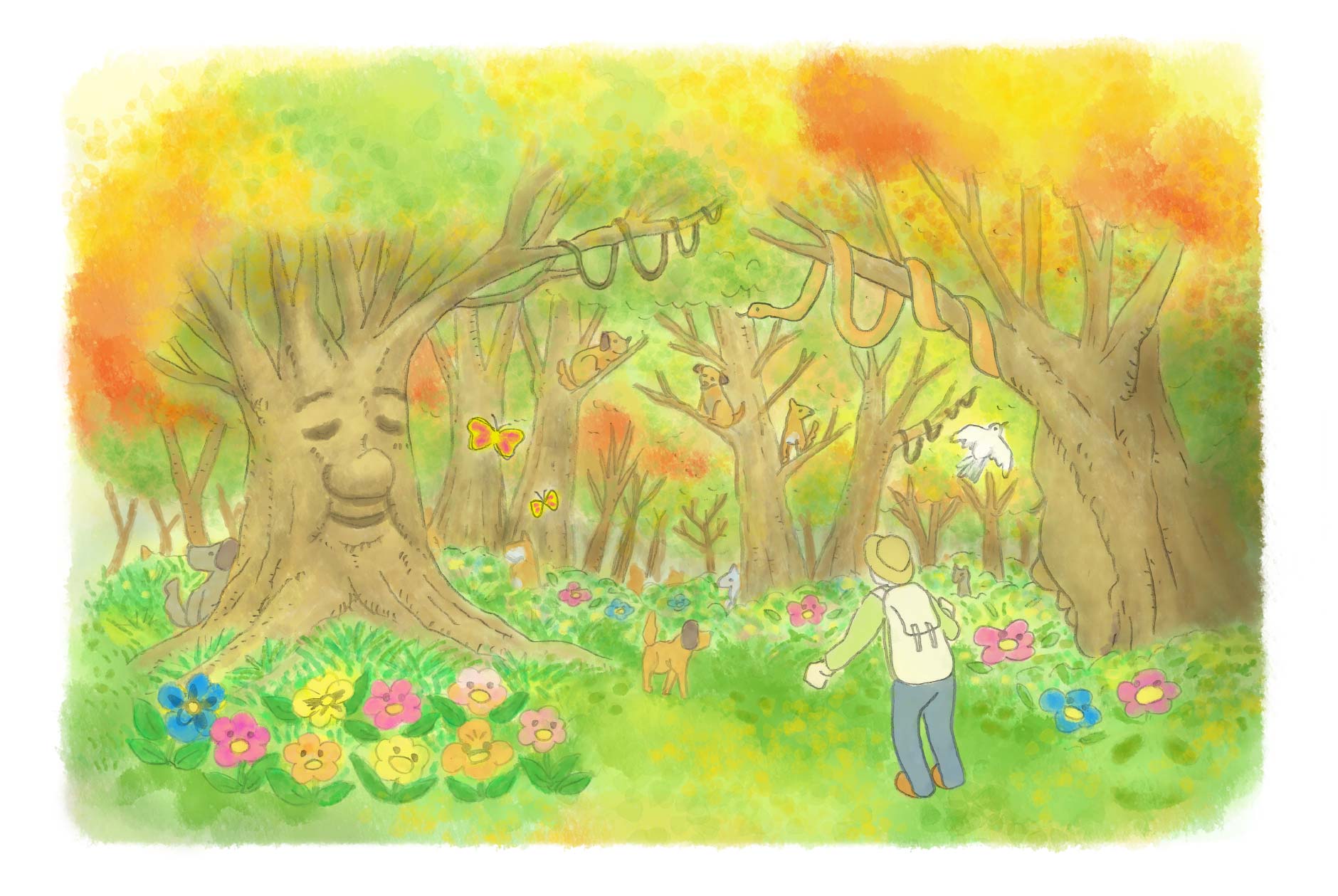 As a child, I suppose quite a few of you saw people’s faces in the wood grain in walls. Those faces might have made you too scared to go to the bathroom alone. In Japan, when we look at the craters on the moon, we see a rabbit pounding rice cakes. We also talk with friends about animals that we see in clouds. Our tendency to see human faces or animals in ambiguous visual patterns is called “pareidolia.”

However, I recently had a strange experience that cannot be explained as a simple misperception.

I was on a hike with my friend and I saw a number of puppies in the forest.*1 I wondered why they were there, but kept walking. Then, I saw many snakes hanging from the tree branches and beautiful birds flying between trees.*1 “This is one strange forest,” I said to my friend. “What do you mean?” My friend gave me a puzzled look.

I tried not to care too much about what I had experienced. As my friend and I continued on a trail up the hill, an insect of a type I had never seen flew straight to me*1 and landed right in front of us. It was a black, shiny insect about the size of a beetle and had a pair of long antennae. I had never seen an insect like that one. I got excited for a moment, thinking that I might have discovered a new species. The next moment, the insect disappeared into thin air.

After the hike, I occasionally saw insects or cats while going about my everyday life.*1 I got into quarrels with my family, who angrily told me that what I saw did not exist. If the cat playing right in front of my eyes didn’t exist, though, then what on earth could it have been?

On another occasion, I saw my car that I had parked in a restaurant parking lot begin moving.*2 I ran back to it to pull the parking brake. However, when I opened the door and touched the brake, it was already firmly engaged.

Looking at me with suspicion, my friend asked, “What’s wrong?” I said that I just wanted to check the brake and hastily headed to lunch. It was my first time visiting that restaurant, but the whole time I was there, I felt totally restless because the patterns on the wall appeared to be human faces.*3 Distracted by the faces, I could not concentrate on the conversation and got really tired.

I decided to go to bed early that day. When I opened the door to my bedroom, though, I had a fright – there was a stranger sleeping on my bed!*4 I could not help but scream. The next moment, though, the stranger in my bed turned into a comforter that was exactly the shape as it was after I woke up that day. But until then, I swear that I even saw what clothes the stranger was wearing.

My family heard my scream, rushed to my bedroom, and broke up laughing at me. I do not want to see that man ever again.

After that experience, I found myself easily distracted by cats or people I saw in the street. I wondered whether what I was seeing was real and always felt exhausted. I then realized that I would continue to see things anyway, whether I worried about them or not, and that realization made me feel silly. I eventually stopped caring about it at all.

I now understand that there are things that only I can see. I am careful to avoid talking about things that suddenly appear in front of me. When I accidentally talk about them, people give me strange looks. I still care about how others see me, but I feel much less worried about seeing strange things.

To be very honest, I think my life would be much more comfortable if, whatever I see, people just said, “Oh, OK. So what are you seeing?” I would like what I experience to be readily accepted by others as something normal.

When people with dementia enter the "Pareidolia Forest",
the following 4 mental and physical dysfunctions might be at play.