Amorphous and startling! A Dizziness Wonderland 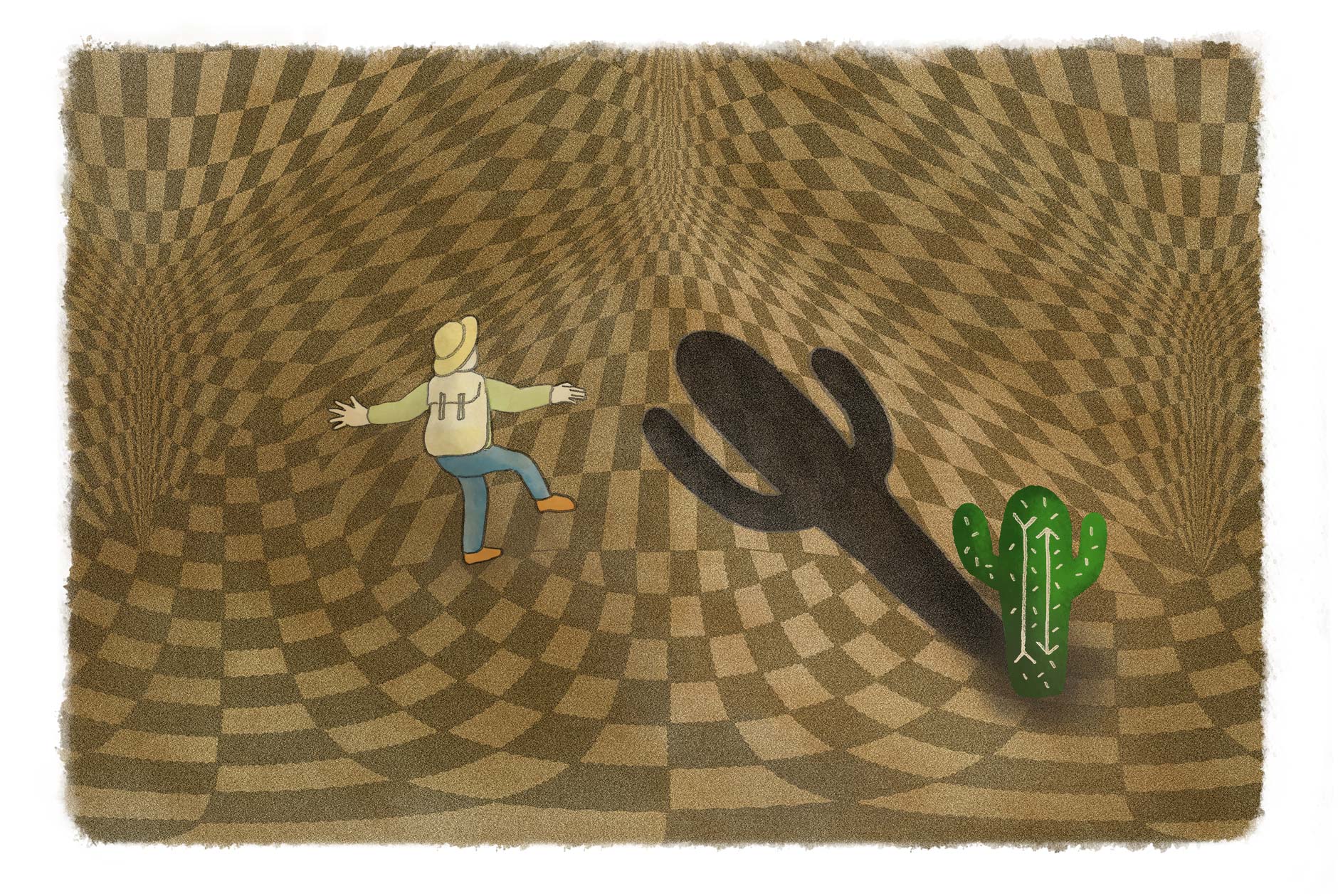 Here in the Dementia World, there is a desert where the sands make wave-like motions that totally confuse your sense of balance. The huge cacti there appear to have different colors and sizes depending on who is looking at them. There is a valley so deep and dark that looking into it makes you feel as if you were being sucked in. There is a vast, sand-colored flatland where you cannot keep track of direction. As you walk farther into the desert, you discover stunning and unimaginable scenery that stimulate your adventurous spirit.

Have you ever walked on a mosaic pavement with geometric patterns and felt as though you were walking on uneven ground? This phenomenon is an example of an optical illusion. In common misperception like this one, your normally functioning eyes or ears trick you by misrepresenting objects or sounds that actually exist.

In another example, lines of the same length appear to have different lengths when arrowheads with different orientations, inward and outward, are put at both ends of them (Müller-Lyer 1889). This shows yet another way the world can be different from how we perceive it.

The other day while I was on the train, I had trouble visually judging the sizes of things I saw. I was getting off at my destination and saw a gap between the train and the platform. I hadn’t had any issues with those gaps in the past; I had only needed to be a little careful. However, that day, the gap looked so deep and wide.*1 Even then, people were getting off the train so casually. I was very frightened, but took the plunge and jumped off the train before the door closed. My heart was beating so fast.

I then walked a bit to the shopping district. As I walked on, I noticed that the road appeared to be moving constantly.*2
I thought I could slip any time. Getting really frightened again, I could not help but grab the arm of the person walking next to me. When I stopped and looked at the ground beneath my feet, I only saw black and white tiles arranged in an alternating pattern.

I also experienced something strange at a hotel, too. It was a newly built, beautiful hotel that used white as the base color of its rooms. My room had a white floor, a white wall, and a white door. Even the furniture was whitish. Unable to tell where the floor ended and the wall began,*3 I almost bumped into the wall several times. The bathroom was stark white with a matching white toilet. I tried to sit on it and ended up landing on my bottom.*3 In addition, the shiny marble entrance of the room looked like a pool of water.*3 I was worried I would slip on it.

On another occasion, I was traveling with two close friends of mine. At certain moments, I lost sight of the one standing to my right and wondered where they might have gone.*4 When I looked around, I was startled to find my friend still standing right beside me. It appeared that I was unable to recognize things that were to my right.*4 They simply vanished from my sight.

However amusing I might appear to those around me, I have picked up a technique for getting on and off the train. In my head, I yell “Hop!” to myself. At the same time, I jump off the train.

You might think, “There’s no way that could work,” but it sure helps. The more careful I become, the more frightening the width of the gap becomes. I think it is because I am paying too much attention to the gap when I am being careful. However, if I “hop” off the train, my body moves more freely. With unexpected discoveries like that, I would like to continue making small improvements in how I see various things.

When people with dementia enter the "Illusion Desert",
the following 4 mental and physical dysfunctions might be at play.