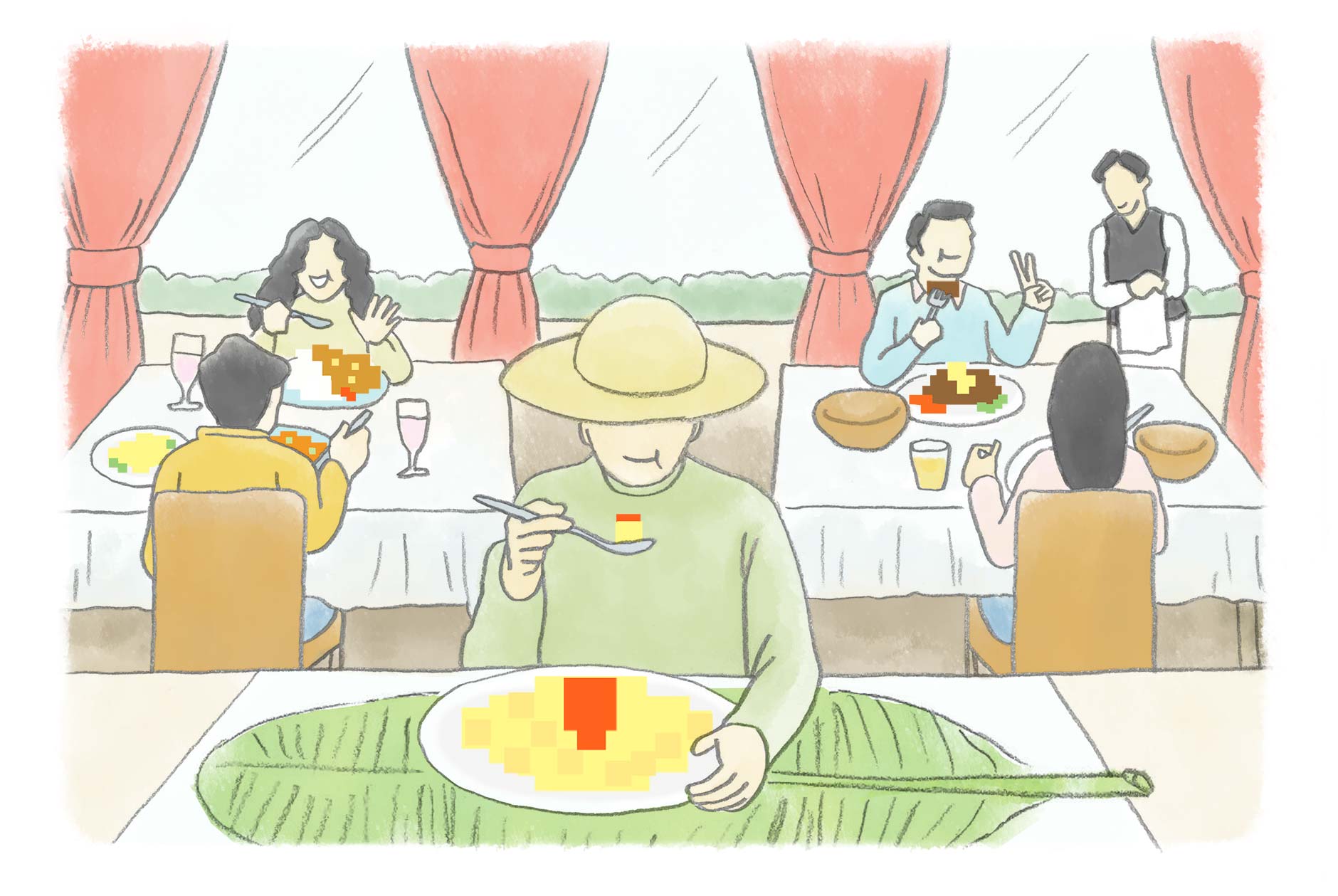 Here in the Dementia World, there is a mysterious restaurant called “Smashing, a Nouvelle Cuisine Restaurant.” In this restaurant, we suddenly become unable to use the language that we are so accustomed to. To place orders there, customers only say “this” or “that.” None of the dishes have names. The dishes are difficult to describe. They are neither Japanese, Chinese, nor French, and do not fit into any particular style of cuisine. In the restaurant, the only word used to describe the flavor of the dishes is “Smashing!” In fact, the only word that is understood there is, “Smashing.” However, beyond a shadow of a doubt, “Smashing” serves the best food on the island.

We communicate with others using common languages. For example, in Japan, people speak Japanese; we do not feel there is anything special about it. However, words carry different meanings and nuances depending on who says or hears them. Each word does not mean the same thing to everyone, and misunderstandings are inevitable. We must also take into account that we may be from different regions in a country, or even from different parts of the world. If you show the word kisha, written with the character for “steam” and the character for “car,” a person from Japan will think of a train while a person from China might imagine an automobile. Words are more vague than we realize. They do not convey exactly what we want to convey as much as we would like.

Recently, I have started to have experiences where I cannot tell what some words mean, even ones I have been using for my entire life.

One day, the rice cooker I had been using for over ten years suddenly broke, so I picked up a new one. I cannot even try to claim I am good with gadgets, so I bought the simplest one they had. I took it home, washed rice for dinner, and set the bowl in the cooker. I then found myself unable to tell which of the cooker’s three buttons to press. One button said “Cook,” but the word did not connect with the idea of cooking rice in my mind.*1 With the old rice cooker, it seems my hand remembered where the right button was and I had been pressing it unconsciously.

On another occasion, I was standing in front of my wardrobe boxes, each of which contained certain kinds of clothes, and found myself at a loss. I was looking for a pair of trunks. One box was labeled “Underwear,” but I could not tell that trunks are a type of underwear.*1 I could not picture trunks being in the “Underwear” box.

I have experienced various other cases when words did not connect well with specific mental images. I received an invitation for a class reunion from my friend from school. The email said, “Let’s meet at Shimbashi Station!” No image of Shimbashi came up in my mind*2, although I was certain that I had visited the place before. I thought, “What kind of place was Shimbashi…?”

When I arrived at Shimbashi Station, the surroundings looked very familiar. After all, it was somewhere I had visited many times before. To tell the truth, things like that happen to me fairly often. I would like to tell you one thing, though. I am actually looking at the positive side as well. I can enjoy the excitement of visiting new places repeatedly! (lol)

On the day of the reunion, while chatting about the old days with my friends, I noticed that I was saying things like, “I have visited ‘there’ recently,” or, “I want to eat ‘that’ again.” I used a lot of “theres” and “thats” because the words I was looking for did not come to mind.*3

Also, while listening to my friends talk about their jobs, I felt that what was coming out of their mouths was all broken into pieces. I tried to connect the pieces to understand what they were saying, but it did not work. *4 On my end, there were things in my head that I wanted to tell my friends. However, when I attempted to express them, only some words came out of my mouth instead of sentences.*5 I am certain I was not responding to my friends clearly. In the end, a friend jokingly asked me if I was already drunk. I laughed it off, saying that might be the case, but I was frustrated that I was unable to convey what surely existed in my mind.

I have just remembered one more example. I do not seem to be able to read Japanese characters that used to be easy for me to read. When I saw the character for Buddha, instead of reading it correctly as Hotoke, I read its two parts instead – i and mu.*6 “What does imu mean?” I wondered. Likewise, I saw Ito, a common surname, I read it incorrectly as “Ifuji.” *6 I ended up thinking, “What an unusual surname!” I can usually remember the right way of reading words after a while. When that happens, I cannot figure out why I was unable to read them earlier.

I now know I cannot create clear mental images of what words mean. Therefore, I have recently been trying out several ideas to help myself. When I put something in a storage box, I do not label the box with just words. I also add illustrations or pictures that show what is inside. For instance, I have a sticker of a T-shirt on the box in which I store my summer clothes. The box with underwear has a picture of trunks on it. Next to the words on my trash and recycling bins, like “Burnable,” “Inflammables,” “Bottles,” “Cans,” and “Plastic bottles,” I put stickers showing a burning fire or a plastic bottle.

While these illustrations do not solve everything, they certainly help by giving me more clues. I realized that simple ideas like these actually help my understanding. Now, I always feel excited about thinking about new ideas to try next.

When people with dementia enter the "Smashing, a Nouvelle Cuisine Restaurant",
the following 6 mental and physical dysfunctions might be at play.