Can you get off a bus that is bound for nowhere? 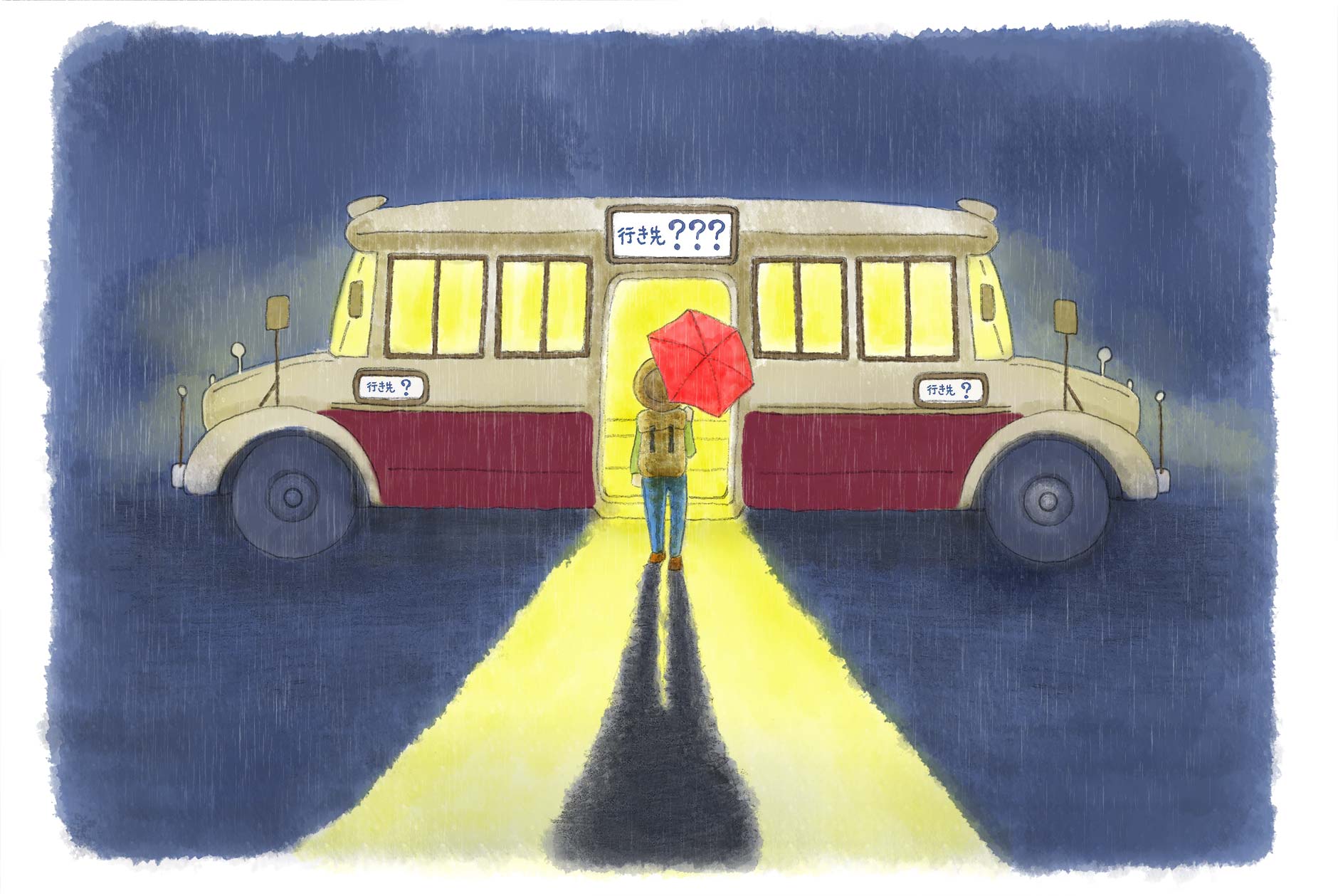 Running throughout the Dementia World, there is a bus called the “Mystery Bus.” This bus befuddles your sense of geography and riding it is sure to give you mysterious experiences. Before you realize it, you will have become unable to tell where you are, where you came from, and where you are headed. Getting off at your destination may also become a challenge.

To avoid such mishaps, I try to stay focused during bus rides. However, I have started to have strange bus experiences.

One time, I boarded the bus I always use to get to the office. It departed from the stop near my house at its usual, scheduled time. I knew exactly where to get off. In other words, I was on my regular commuting route.

The bus ride was only supposed to be about 20 minutes, but I went slightly absent-minded while on the bus that day. I was probably a little tired. Then, before I knew it, I could no longer tell anything: where I was, where I came from, and where I was headed.*1

I looked out the window hoping the scenery and buildings would remind me of everything, but they did not help at all.*2 In fact, I felt as if I were traveling somewhere I had never been before.

Before I knew it, the bus made quite a few stops, and passengers got off one after another. I stayed on the bus all the way through to the last stop because I did not know where to get off. Eventually, while speaking with the bus driver (who was really kind) at the last stop, I realized that I was carrying a commuter pass with me, and that it told me where my destination was. I got on the bus that followed the same route in the opposite direction and managed to make it to the office, although I was very late.

I had another somewhat peculiar experience on the bus just the other day. Everything was going smoothly at first. I did not forget where I was headed. To ensure I would get off at the right stop, I made sure to check where I was every time the bus made a stop. When it was time for me to get off at the next stop, I was ready.

“This is my stop,” I thought to myself as I reached up to press the stop button. However, I was only thinking of pressing the button. My arm did not actually begin moving toward it.*3 I felt as if I were bound by a magical spell… It was a total mystery to me.

As it happened, I was not able to press the button, and the bus drove past the stop. I could see the stop right out the window. It might have been that I put my brain under too much stress, trying so hard not to forget where to get off. The signal to press the button might not have reached my arm because the stress had exhausted my brain so badly.

After this frustrating experience, I started to wear my pass in a case around my neck on my way to and from the office. In the pass case, I keep a note that says where I want to get on and off the bus. It also says that I have dementia and would appreciate help when I am in trouble.

Now, if I cannot tell where I am headed, I will look at my pass case and check the destination. If I still do not know where I am going, I will ask people around me to read the note in my pass case. “I would like to go to this place. Am I on the right bus?” I ask. People will tell me, “That will be two more stops.” Some people will be kind enough to say, “You need to get off at the next stop.” Sometimes, they even press the stop button for me.

I tend to be a little shy with people, but the note helps me talk to those around me. People are kind and helpful. They do not give me strange looks. With their help, I feel that I can take the “Mystery Bus” quite comfortably.

When people with dementia enter the "Mystery Bus",
the following 3 mental and physical dysfunctions might be at play.